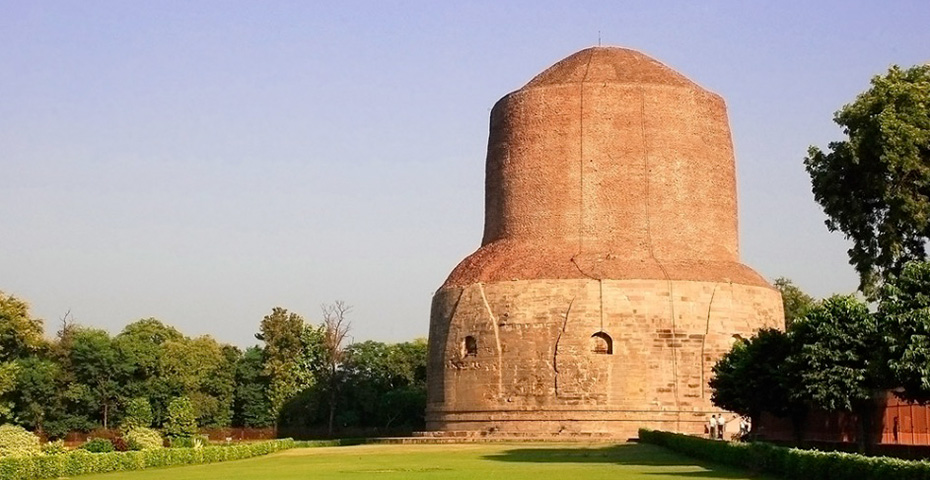 The heavenly city of Sarnath

Buddha came to Sarnath to preach his message of the middle way to nirvana after he achieved enlightenment at Bodhgaya, and gave his famous first sermon here. In the 3rd century BC, Emperor Ashoka had magnificent stupas and monasteries erected here, as well as an engraved pillar. When Chinese traveller XuanZang dropped by in AD 640, Sarnath boasted a 100m-high stupa and 1500 monks living in large monasteries. However, soon after, Buddhism went into decline and, when Muslim invaders sacked the city in the late 12th century, Sarnath disappeared altogether. It was ‘rediscovered’ by British archaeologists in 1835.

Today it’s one of the four key sites on the Buddhist circuit (along with Bodhgaya, Kushinagar and Lumbini in Nepal) and attracts followers from around the world, especially on Purnima (or, informally, Buddha’s birthday), when Buddha’s life, death and enlightenment are celebrated, usually in April or May.

This large, ruined stupa dates back to the 5th century AD, and marks the spot where Buddha met his first disciples. The incongruous tower on top of the stupa is Mughal and was constructed here in the 16th century to commemorate the visit of Emperor Humayun.

There are numerous large buildings and the Buddhist landmarks in Sarnath. A part of the acclaimed and vital Buddhist landmarks at Sarnath are the Dhamekhastupa, the Chaukhandistupa and monasteries and temples of various schools of Buddhism from China, Japan, Thailand, Burma and others nations. The Indian Buddhist society which is known as Mahabodhi Society maintains a park around the sanctuary of Buddha. Inside the park premises, the Mahabodhi Temple has a tooth relic of the Buddha. The Ashoka pillar of Sarnath is exceptionally well known and it is the National emblem of India. The archaeological museum fully modernized, 100-year-old sandstone museum houses wonderfully displayed ancient treasures, such as the very well-preserved, 3rd-century-BC lion capital from the Ashoka Pillar, which has been adopted as India’s national emblem, and a huge 2000-year-old stone umbrella, ornately carved with Buddhist symbols.