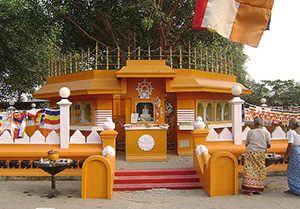 The destination for Buddhist pilgrims- Sankisa

Sankisa is identified with numerous Myths relating to Lord Buddha, particularly his descending from the heaven after death makes it a perfect destination for Buddhist pilgrims. The town is for the most part well known for the archaeological and historical significance. There is a small temple of BISARI DEVI where she is loved as a goddess of fertility. Buddhist sculptures going back to Mahayana age is also found on a few walls at the site.

The remaining parts of Asokan Pillar are likewise worth a visit while the pillar with an elephant in lieu of the typical lion is additionally mattered of fascination for many tourists. This elephant is said to be the portrayal of the white elephant which Maya Devi had envisioned at the time of conception of Siddhartha (Lord Buddha). The Shiva linga is likewise very intriguing and draws in Hindu religious devotees. The Shravan Mela held each year draws a lot of travellers.

Sankasia is also recognized as Basantpur village of Farrukhabad district of U.P. in India. It is found 47 kms from its district headquarter Farrukhabad and 200 kms from Agra. The best time to visit to the place is between October and April.

There are vast arrays of precious monuments of Buddhist history.

Ashokan Pillar & the Buddha Temple: Tourists can witness The Ashokan Elephant Pillar and a Buddha Temple that is situated here. The pillar supports on the large pavilion, surrounded by an iron fence.

Bisaridevi Temple: It is a temple of Bisaridevi that is placed just 500 yards from the village it stands on a sacred stupa measuring 455 x 303 metres. A huge Shivlinga is also placed here. Here, a local festival, SavanMela is celebrated in July-August months of the rainy season with full of passion and fervour exchanging the number of sweets with associates.

The village is mainly famous for the archaeological and historical importance. There is a small temple of BISARI DEVI where she is worshipped as a goddess of fertility. Buddhist sculptures dating back to Mahayana age is also found on some walls at the site.

The remains of Asokan Pillar is also worth a visit, while the pillar with an elephant in lieu of the usual lion is also mattered of attraction for many tourists. This elephant is said to be the representation of the white elephant which Maya Devi had dreamt at the time of conception of Siddhartha.