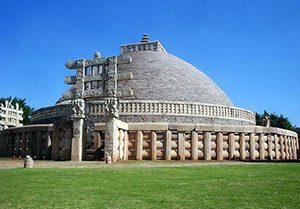 Sanchi is small town around 46 km from Bhopal, the capital city of Madhya Pradesh. It is one of the oldest pilgrimage points in India. The stature of Sanchi holds high credential in India, aside from being a highly devoted Buddhist pilgrimage point in India. There are various Stupas and monasteries that gives the testimony to the glory days of Buddhism in India. The magnificent SanchiStupa is believed to be the oldest stone structure on the planet and is one of the UNESCO World Heritage Site in India. Beautifully proportioned, the Great Stupa is the centrepiece of the monumental area, directly ahead as you enter the complex from the north. Originally constructed by Ashoka, it was enlarged a century later and the original brick stupa enclosed within a stone one.

In 262 BC, repentant of the horrors he had inflicted on Kalinga (Odisha), the Mauryan emperor Ashoka embraced Buddhism. As a penance he built the Great Stupa at Sanchi, a domed edifice to house religious relics, near the home town (Vidisha) of his wife Devi. Sanchi became an important Buddhist monastic centre and over the following centuries further stupas and other monuments were added. After about the 13th century it was abandoned and forgotten, until rediscovered in 1818 by a British army officer.

Although you can visit Sanchi in a day trip from Bhopal, this crossroads village is a relaxing spot to spend the night, and a number of side trips can be taken from here.

The Sanchi Museum has cosseted the way of life, traditions and architecture in India. This fine museum has a small collection of sculptures from the site. The centrepiece is the 3rd-century-BC lions-on-lotus capital from the Ashoka-era Pillar 10. Other highlights include a yakshi (mythical fairy-like being) hanging from a mango tree, and beautifully serene Buddha figures in red sandstone. There are also some interesting photos showing the site pre-restoration. Admission is with a ticket for the monuments compound.Assorted gateways, Toranas parts, the crown of the Ashoka Pillar, Pottery are the couple of things that are to be found. Situated in the most pompous region, a visit to the Museum is a much needed experience. There are numerous stupas including the Great Stupa of Sanchi. These stupas were built to keep the evidence of supporters of Buddha and some of his followers.