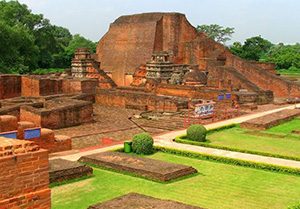 The Buddhist monastic center of Nalanda

Nalanda is a Buddhist monastic centre situated in southwest of Bihar Sharif in central Bihar state, northeastern India. Nalanda’s traditional history dates to the time of the Buddha and Mahavira, the originator of the Jaina religion. Extensive excavations done by the Archaeological Survey of India demonstrate, in any case, that the establishment of the monasteries belongs to the Gupta period. The powerful seventh century leader of Kanauj (Kannauj), Harshavardhana, is accounted for to have contributed to them. Nalanda kept on thriving as a centre of learning under the Pala line and it turned into a centre of religious sculpture in stone and bronze.

Founded in the 5th century AD, Nalanda – 15km north of Rajgir – was one of the ancient world’s great universities and an important Buddhist centre of academic excellence. When Chinese scholar and traveller XuanZang visited sometime between 685 and 762 AD, about 10,000 monks and students lived here, studying theology, astronomy, metaphysics, medicine and philosophy. It’s said that Nalanda’s three libraries were so extensive they burnt for six months when foreign invaders sacked the university in 1193.

As per explorers’ records, from Gupta times the monasteries of Nalanda were surrounded by a high wall. Allow at least an hour or two for wandering the extensive monastery ruins. They’re peaceful and well maintained with a parklike atmosphere of clipped lawns and shrubs. The red-brick ruins consist of 11 monasteries and six temples. Before the monasteries stood a row of bigger sanctums, or stupas in brick and plaster. The whole complex is alluded to on seals found there as Mahavihara. A museum at Nalanda houses a significant number of treasures found in the excavations. In 2016 the vestiges were assigned an UNESCO World Heritage site. About 1.5km beyond the Nalanda ruins (bear left, then right, then take the first right turn after Surya Kund pond), you’ll find the striking NandyavartaMahal at Kundalpur, a temple complex believed by the Digambar Jain sect to be the birthplace of Lord Mahavira.