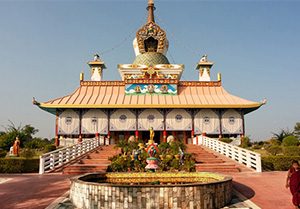 The Buddhist pilgrimage site of Lumbini

Lumbini is a Buddhist pilgrimage site which is situated in the Rupandehi region of Nepal. Lumbini is where Lord Buddha was conceived from Queen Maya Devi in 623 BCE. Lumbini is one of the four most important pilgrimage destinations for Buddhists with other three being Kushinagar, Bodhgaya and Sarnath. Lumbini has been the destination for the Buddhists around the world since it is a place which is seen by great devotion by every one of the devotees. The spiritual heart of Lumbini, Maya Devi Temple marks the spot where Queen Maya Devi gave birth to Siddhartha Gautama in around 563BC. In the adjoining sacred garden you’ll find the pillar of Ashoka, ancient ruins of stupas, and maroon- and saffron-robed monks congregating under a sprawling Bodhi (pipal) tree decorated with prayer flags. Buy your entrance ticket 50m north of the gate to the Sacred Garden, and remove your shoes at the gate.You can walk around the ruins on a raised boardwalk. The focal point for pilgrims is a sandstone carving of the birth of the Buddha, reputedly left here by the Malla king, RipuMalla, in the 14th century, when Maya Devi was worshipped as an incarnation of the Hindu mother goddess. The carving has been worn almost flat by centuries of veneration, but you can just discern the shape of Maya Devi grasping a tree branch and giving birth to the Buddha, with Indra and Brahma looking on. Directly beneath this is a marker stone encased within bulletproof glass, which pinpoints the spot where the Buddha was born.Lumbini was listed on UNESCO World Heritage site in 1997 as Lumbini is the origin of Buddha and holds imperative culture and legacy identified with Buddha.

Located 22km west of Siddharthanagar (Bhairawa), Lumbini is a unique religious site with much to say, whether intentionally or not, making for a very thought-provoking visit. It was here, around the year 563 BC, which is one of history’s most revered figures, Siddhartha Gautama – better known as the Buddha – was born. The actual location is marked by the poignant Maya Devi Temple, named after the Buddha’s mother. Its origins date back over two millennia.

Lumbini is the holy site for all Buddhists. There are different sites that are very well known and are the main attraction of Lumbini. The Maya Devi sanctuary and the tank which is close to the temple are a part of the sacrosanct and holy complex. Ashoka Pillar is another attraction of Lumbini.